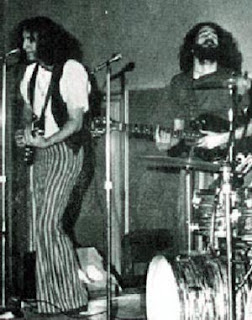 The White Rock Sun published an online article about touring perennials TROOPER (seen above as Winters Green), and in one paragraph, the writer mentioned:

From this point in time it becomes a blur, WINTER’S GREEN became APPLEJACK and barnstormed through Lower Mainland clubs for a number of years. The Zodiac and Mad Dolphin in New West, Cameo Supper Club and Madigans in Whalley, The Dungeon in Coquitlam and our very own Bird Cage aka Purple Monkey up on King George Highway.


Sparkling Apple also played every one of those places, and I do remember Applejack performing at The Bird Cage with Ra, Smitty, Tommy Stewart and bassist Harry Kalensky. Heck, I saw Applejack at the Cameo because it was three blocks from my house! My brother Chris saw their earlier incarnation Winters Green when the band played a dance at Mary Jane Shannon Jr. High School (now called Guildford Park).

Madigan's is mentioned in the White Rock Sun article as well. The connection with my brother is that a bunch of us had a stag for Chris at this bar, and the band performing that night was none other than Heart (who also played the Dungeon around the same time we did). The "new guy" that night was Ann's sister Nancy, who pretended to be playing electric guitar, but wasn't plugged in! (Nancy may disagree with me.) Madigan's is now a strip club known as T-Barz.
Posted by Captain Maniac at 11:53 AM